This post is for a young reader who shares my deep and abiding affection for the malicious and maladroit creature known as the dragon. There will be a forthcoming installment of Field Notes with a dragon. Since, however, that’s a few drawings down the line, I thought I’d offer up florilegium draconum, or…er… bouquet of dragons, from medieval manuscripts to hold over all those who want more dragons.

The medieval bestiary seems the most sensible place to begin, and one of my favorites is the Aberdeen Bestiary which is as good as Thanksgiving for the eyes. In the nature of bestiaries, the Aberdeen provides practical (in a manner of speaking) insight into the species. 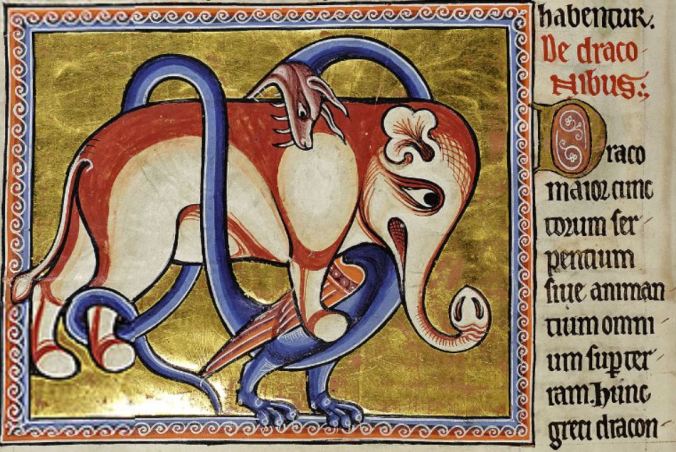 Thus, we learn not only that dragons are the largest of both serpents and animals upon earth, but also that their emergence from the caves makes the ether tremble. If you ever wondered where dragons come from, they apparently originated in Ethiopia and India. Regrettably, the  bestiary does not say whether there is a distinction–as with elephants–between the Indian and the African species. Instead, the text provides instructive details like which end to be more afraid of, and perhaps that is more important than which branch of the family has the bigger ears. Fun fact for your next dragoning venture (like birding only far, far more perilous): a dragon’s strength lies in its tail not its teeth. (That seems rather contradicted by those fangs in the illumination but never mind.) Apparently, the strangling strength of those tails makes them fearsome threats to even great creatures like elephants. As with any good bestiary, the point is not natural history but spiritual illumination and so the text continues with an explication of how the devil is like the dragon. To be edified, go to the Aberdeen MS.

That connection between dragons and evil plays out in hagiography (writings on the lives of the saints) as well as in bestiaries. For example, dragon (demon) plays an important role in demonstrating St. Margaret’s authority and sanctity. In short, when our gal Margaret refuses to dally, marry, or have anything in any way tawdry to do with the pagan Olibrius, she is tortured not only by oily Olibrius, but also the devil. 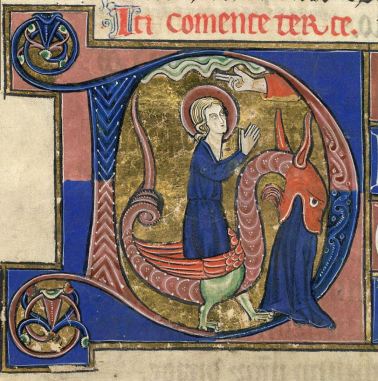 In what can only be utter frustration at Margaret’s seeming immunity to temptation and torment alike, a demon appears in the form of a dragon and swallows her whole, thinking that’ll settle her hash. Unfortunately for the dragon, Margaret turns out to be as indigestible as she is invulnerable.  Lunch gets the better of the dragon-coming and going as we see here. (Of course, anyone could have told him that dress is way, way too much roughage.)

Returning to the earlier theme of natural history, we find this fellow in the Liber acerbe etatis from the second half of the 14th century. Personally, I do not believe that heresy was what got 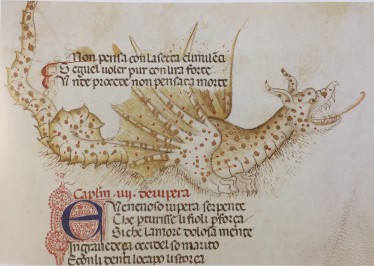 Francesco Stabili, the composer of the Liber’s “encyclopedic [vernacular] poem dealing with the natural sciences, physics and religious philosophy” burnt at the stake (Imaginary Creatures, p 32). My money is on the dragon portrayed here hunting him down and crisping him for writing a poem that inspired such a spectacularly unflattering and spotty portrait. 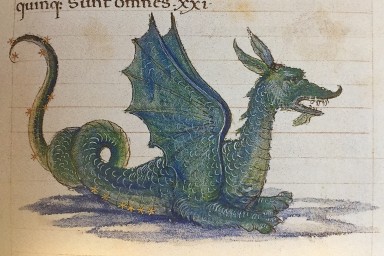 Just to show how cosmically important dragons are, the next example comes from a manuscript that deals with astronomy. If you’re wondering what about those things that look like shuriken are all over the hindquarters of this dandy with a chin-beard are, wonder no more. They are not ninja weapons but stars. This particular section of the manuscript treats the constellation Cetus. While we today know this constellation as “the Whale,” it was better known to as a sea monster to the Greeks. Ergo, a starry-bummed dragon. 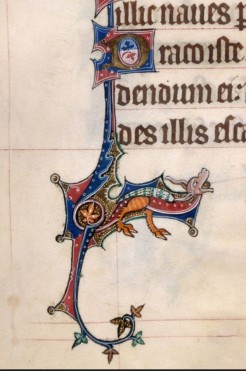 While bestiaries, natural histories, and astronomical miscellanies are all excellent places for finding representations dragons, some of the most delightful dragons–in my opinion–are the wholly decorative dragons one trips over in margins and lettering.

Admittedly, in real life, the only ones who think that dragons are decorative are dragons themselves, vain creatures that they are. Moreover the thought of tripping over an unexpected dragon should make anyone with any instinct for self-preservation watch their footing. In manuscripts, however, anything goes. So, a few dragons from medieval marginalia.

Another Gorleston Psalter beauty, which is worth going to the British Library site for in full, takes up the ubiquitous knight-dragon motif below. As with saints, knights generally get the better of dragons (as opposed to snails who tend to beat knights hollow. Go figure.) 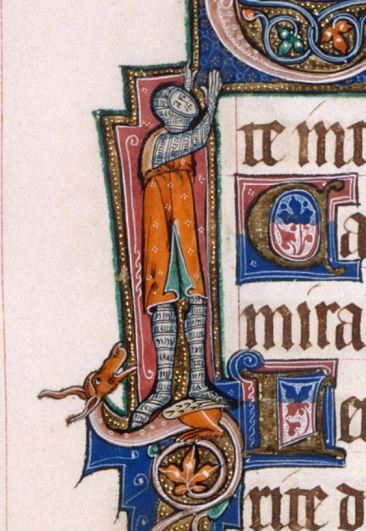 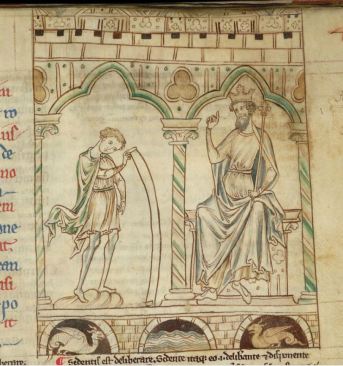 Here, in an image which must deeply wound dragonly pride, the artist has reduced dragons to mere architectural filler. The upside for the beasts is that they can nod off, make lunch dates, or whatever while Merlin (on the left) drones on about the world’s longest prophecy to Vortigern.

No one will ever know.

Speaking of lunches, in this lovely marginalia from the late thirteenth-century Alphonso Psalter below, it’s hard to tell whether these two are sharing a salt lick or facing off. Whatever they are doing, I have to say this is one of the hodgepodgier dragons I’ve seen with his bird-like wings, ivy-leaf claws, stripes, and spots. It’s really no wonder it doesn’t know whether to kiss the stag or attack it. It’s probably having an identity crisis.

Some other post, I’ll devote attention to dragons in other manuscript traditions.

For now, I’ll just  pop in this crick-necked cutie. The late fifteenth-century manuscript from Northern Italy contains a collection of Minhagim (“religious customs”).  The illustrator has included this little fellow to spice up a passage treating with the seventh day of the Sukkot festival, Hoshanah Rabba.

We’ll wrap up in good, oxymoronic style with a selection of initials, specifically with a variety of zoomorphic capitals rather than inhabited capitals like the “D” with St. Margaret above.

As always, the British Library Digital Manuscripts page is a delight to search and provided the lion’s share of the images here.  Another of my favorites digital manuscript libraries is the Codices Electronici Sangallenses (Digital Abbey Library of St. Gallen). Interestingly, in my dragon hunting, the first thing to come up at CES was an eighteenth-century grimoire, Le Véritable Dragon rouge, based upon a lost sixteenth-century original. I didn’t include it because the drawings are so very rough, but it is an interesting read.

2 thoughts on “A Bouquet of Dragons”