I expect that for many people, libraries serve as a favorite ‘second home.’ For some, that home may be the tried and true library of one’s academic institution. For others, it will be the library that houses the particular book or item that is the current object of desire. [Scribal rant: For crying out loud Northshore Interlibrary Loan, you told me I was third in the queue for series one of The Good Place in January. January! It’s June!] And yes, dear reader, that momentary rant means that I do not “do” Netflix, Hulu, or any such. I’ll pay for books, but I will not pay for TV, and that brings us back to the subject at hand. Books, books, books, and the purchase thereof.

Being generally curious as well as thoroughly acquisitive where books are concerned, I have a fairly eclectic personal library. From books on the medieval and renaissance spice trade to guides on the flora and fauna of the Alps, from Ottoman poetry to the geology of caves, from books on the history of the peony to histories of typefaces, my natural profligacy is contained by two things alone: budget and space. I’m currently working on insulating my bedroom with floor-to-ceiling bookshelves. I’ll let everyone know how it works out next winter.

Some of my favorites books are catalogues from museum exhibitions.  The best catalogues distill a remarkable amount of scholarship about the objects’ or artists’ period and importance, and they do it with pictures! Or more correctly, for the pedants among you, plates. There are a few museums that I cannot seem to visit without leaving loaded down by new treasures (all legally acquired from the bookstore). The Musée de Cluny in Paris, for example, has dented my wallet repeatedly.  Another is the Cloisters in New York City.

Timothy B Husband’s catalogue The World in Play: Luxury Cards 1430-1540 from a 2-15-15 exhibition at the Cloisters is one such treasure from the Cloisters. Did I need a book examining the evolution of playing cards as the late middle ages slipped toward the early modern? Mmmm-yeeeees. When I purchased this catalogue, I was thinking it would give me the lay of the land regarding the style and production of cards of this time and maybe some of the games.

Games? Alack and alas, no.

Still, the catalogue more than made up for that infelicity. Perhaps this is common knowledge for others, but I did not know that playing cards (like so much else) were a legacy of cultural intersection from this age of exploration. They were introduced to the West, Husband writes, “about the middle of the fourteenth century, probably from the Near East via Venice or from the Mamluk sultanate in Egypt, through southern Italy, Sicily or even Spain” (p. 13). Since one of the foci of the novels upon which I’m working is the intersection of Christian West and Muslim East, I felt that little tidbit more than made up for the fact that, apparently, the games of the day are a mystery.

That mystery becomes apparent when one scans the richness and diversity of the few extant decks from the period. Admittedly, the variety of suits is not so important as their number, and there are consistently four.  Early variety gives way to certain norms. Where the French would eventually settle upon cups, batons, swords, and coins for their suits, the Germans had Acorns, Leaves, Hearts, and Bells, but that was the mid-fifteenth century.  Before that, you’ll get falcons, deer, hounds, and herons like the elegant bird below.

Of course, you and I will “get” nothing of the sort as such elegant, hand-painted cards as these have mostly gone the way of all things fragile and well used. As Husband writes, “Inevitably, cards are lost, torn, worn out, and the entire deck thrown out. Cards are fundamentally fugitive. But they are also ubiquitous” (ibid). The remains from that fugitive lot that Husband analyzes are certainly tantalizing. But where the suits can be made sense of, the multiplicity and variation of the face cards utterly confounds me. Where we today have limited face cards in our decks, the decks that Husband analyzes don’t stop at kings and queens, jacks and so on.  Take, for example, this potter who might be the inspiration for Demi Moore’s character in Ghost. 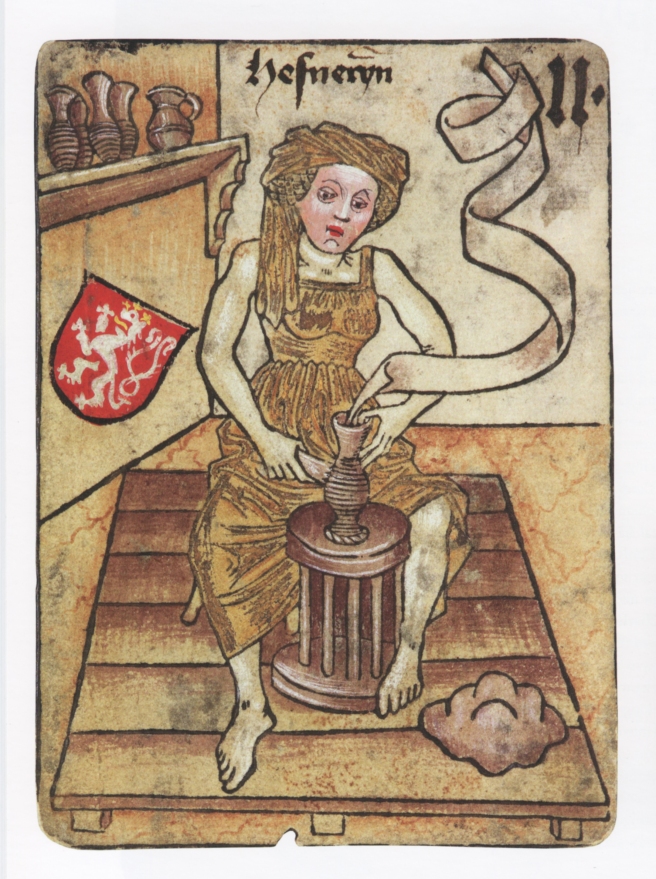 The suits of what is referred to as the Courtly Household cards are the countries of Germany, Hungary, Bohemia, and France. This sample from the colored woodblock prints is rather remarkable in its details. (The tile floor!) The above female potter is an example of one of the many functionaries who populate the deck in addition to the king and queen. Additionally, one finds ladies-in-waiting, marshals, chamberlains, chancellors, messengers, heralds, knights, crossbowmen (below), hunters, trumpeters, masters of the households, barbers, fishmongers, and fools. Maybe people who play complex card games can see their way through this and imagine possibilities, but as Canasta is the most complex thing I ever mastered (and promptly forgot), I’m stumped.

Where the charming Courtly Household cards above, illustrate the various functionaries found within the world of the elites, a century later, we see another artist reflecting quite differently, even critically upon the world before him. The kings of the deck in particular reflect the reality of an expanding world, as with the King of Bells card below.

The kings of this deck by Peter Flötner are not solitary, posed men, but men of action. As with the non-European King of Bells who towers over the tiny (exotic) elephant and the instrument of exploration ship at his feet, the other kings tower over their landscapes. Another, dressed a bit like an Ottoman, raises his scepter over prone infants (looking, as Husband points out, uncomfortably like Herod surveying the slaughter of the innocents); yet another, this time very European king stands before a pikeman, clearly directing the actions of a great empire.

From the kings, the deck runs down the social scale. Yet, interestinly repulsive as an Under Knave with a conspicuously dripping nose may be, it’s the thematic representations on the pip cards that are the real innovation here. The acorn suit is bedecked with greedy boars; the leaf by peasants occupied variously; hearts by lovers in scenes from the tender to the profane; and bells by scenes of folly in all its various forms. In a move that joins together entertainment and commentary, the artist portrays what he saw and knew from a world stage where great men toyed with the lives of others to humbler scenes of courtship, from greedy consumption to the unmasking of deceit.

Now all I need is for someone to reproduce one of these decks and invent the games to go with it. Surely, that’s not asking too much.

6 thoughts on “On My Shelves: the fugitive and ubiquitous”