It was a horrible position for a self-respecting knight to find himself in. It wrapped  humiliation and ludicrousness all up in one neat-if rather slimy-package.

Admittedly, Hubert’s creator had drawn him into the margins of Psalter where humility is all well and good. Despite this, Hubert felt absolute certainty that carrying a shield with a smiley face on it and facing off against a snail was not the thing. If the plan is to nab oneself some escargot, then a little toothpick of a spear will serve the purpose. Otherwise, a knight wants a sword.

And some proper mail. Hubert really did feel his martial accoutrements were inadequate. For heaven’s sake, he’d seen a woman on another leaf carrying a proper sword as she challenged a dragon with a seven-headed tail.

Alright. She wasn’t a proper woman, not with those green lion’s legs, but the less said of that sort of thing, the better. It was a rule of the margins not to hold one’s fellows responsible for some mad illuminator’s whimsy. 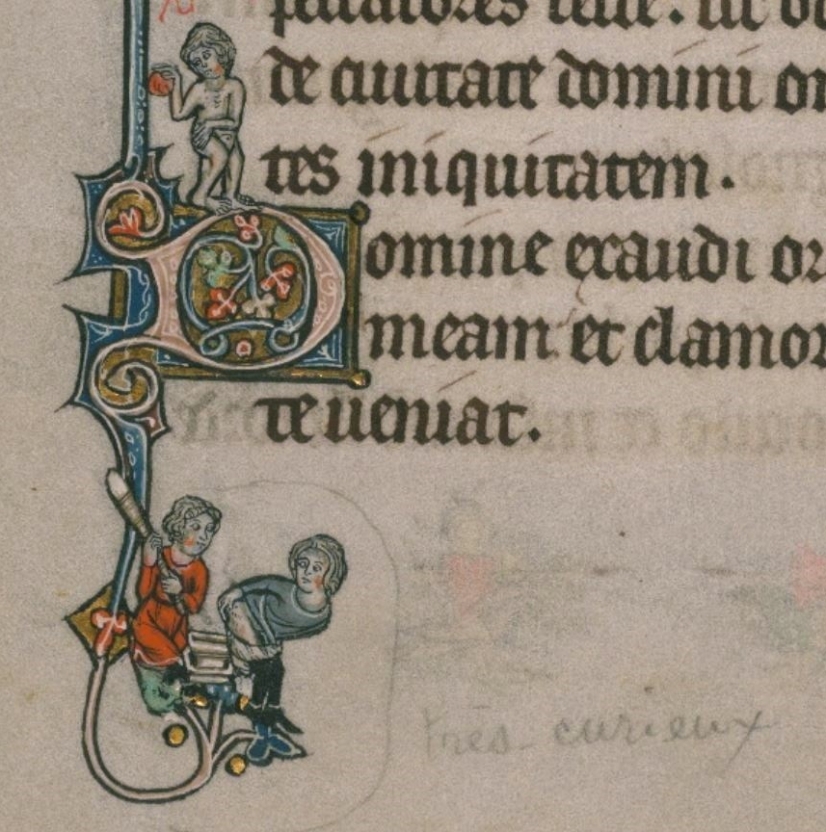 Look away? Frequently and quickly.

Judge them? No. (Très curieux, indeed.)

Thus is was that Hubert resolved to find himself more chivalric prospects, by making his way into another manuscript. After some searching, and so he made his way into romans arthuriens. [1]  Here, Hubert thought–among works like Le livre de Lancelot du Lac, La queste del Graal, and La mort au roy Artu–his martial possibilities would improve. He would find a good page, a better, snail-free page, and make a home for himself.

Wandering through the romans, Hubert encountered the usual random assortment of babewyns and drôleries that monkey about in the margins and hang off the decorative caps like so many stockings off the chandelier after a blow-out. After his more reverential setting among the Psalms, Hubert found himself taken aback by inordinate amount of violence involving backsides. 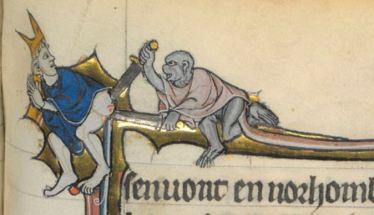 Still, into the heart of the pages, Hubert saw the sort of thing that made his heart pound with hope. 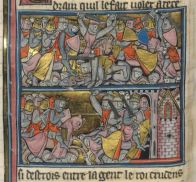 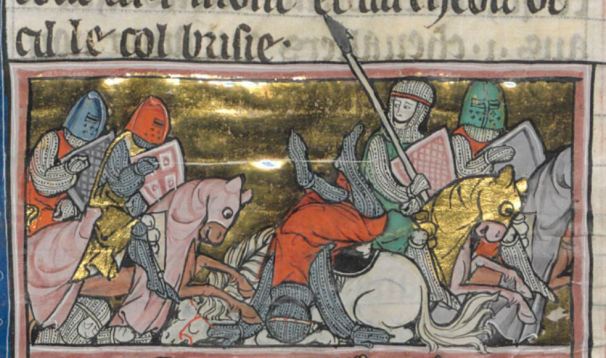 166r the word you’re looking for is OW

Hubert was in heaven. Of course, Hubert knew that that chivalric code consisted of more than just fighting. After all, a good knight only has a good night if he fights for the right thing. And the best knights are protected by the BVM and dream of martial deeds.

And if they dream of falling, they are caught by seraphim. 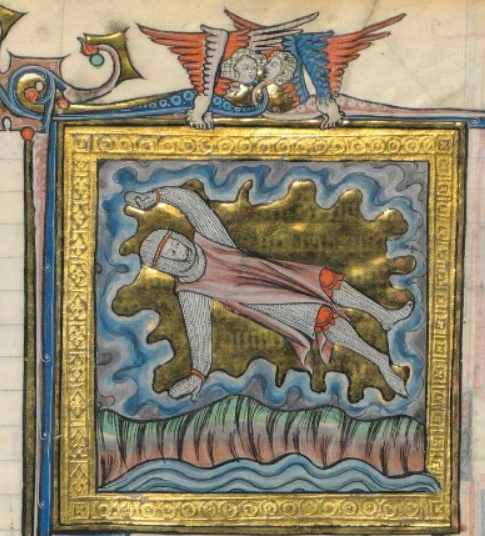 Of course, there were the occasional indulgences (the fleshly sort, not the faux penitential-bring on the Reformation! sort). There is always the risk of Bad Dancing or bullying. Sometimes its hard to tell the different unless you actually read the text, and Hubert wasn’t much interested in the story at this point.

Then, there is always the ceremonial coming to fisticuffs while putting up the pavilion.

226r. “If you tell me to put my left foot in and do the hokey pokey one more time instead of helping me with this pavilion, I’m going….

The occasional misjudgement about drinking and riding…. 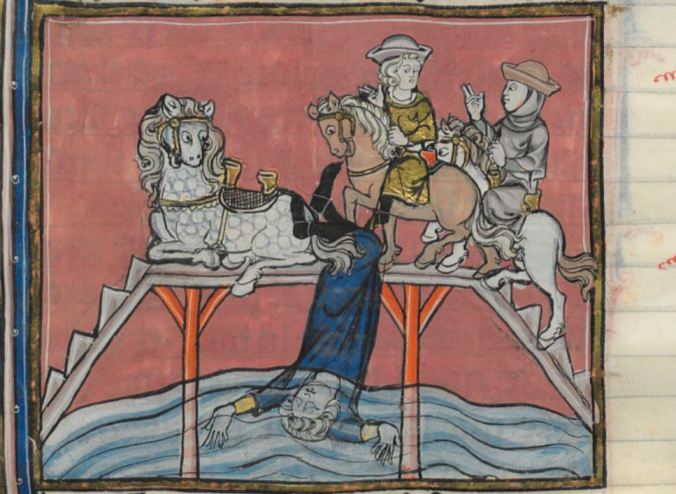 And then, there are the women. Sometimes they even marry them albeit reluctantly.

All in all, it was more promising than not. No smiley face shields and, most importantly, no snails.

[1] You can’t possibly be seriously wanting a rational explanation for how a knight in the marginalia of the Fieschi Psalter W. 45 (Walters Art Museum of Baltimore, Maryland) found himself in BNF, Francais 95 (Bibliothèque nationale de France in Paris).   Imagine a Terry Pratchettian explanation of the content of every book, codex, stone, or papyri anywhere existing on a its own space-time continuum.  Right? Right. Back to Hubert.

NEXT WEEK: Hubert heads to the margins of his new romans to find himself a place to call home.

2 thoughts on “Adventures in the Margins”