Wherever I go, I tend to pick up books on words, histories of slang, desperate attempts to stave off words going the way of all flesh, and that sort of thing. I’m a sucker for a book that lifts the curtain on language in a fresh way, introduces me to new (old) words, or breathes life into the forgotten. If a book makes me snort with laughter or tear up in surprise, all the better.

A few years ago in the Ulster Museum, I found Diarmaid Ó Muirthe’s Words We Don’t Use (Much Anymore), which book roams widely and wildly throughout the British Isles in its efforts to collect and salvage words that are falling from common usage. I often find myself wishing that Ó Muirthe had dug a little deeper into the lexical history of entrance of words into use and their evolution over the centuries. That, however, is not his objective, and what he does provide is evocative.

Take gilfer, for example, a word that Ó Muirthe traces back to Norse with evidence of  usage from Lancashire, East Anglia to the south-east of Ireland. Given where it’s been used together with its Norse origins, I suppose–although Ó Muirthe does not say so–that it came into the Isles following the Viking conquests and settlements. From its original meaning in Norse in which “gylfra means, according to the great Icelandic scholar Vigfusson, an ogre, a she-wolf,” the word shifts to denote a foul-mouthed woman who tears apart not limbs but reputations. So, from she-wolf to gossip of the worst sort. While slander is, alas and alack, far from obsolete, this highly satisfying word us. Shame we can’t reverse that.

This summer while at the lovely Chester Beatty Library, I picked up  Other Wordly: Words Both Strange and Lovely From Around The World. This little treasure is best described as a florilegium of semantically unique words.  From a wide variety of languages, Yee-Lum Mak collected words that have a meaning which simply cannot be captured in translation by any single word. Here, are a few of my favorites: 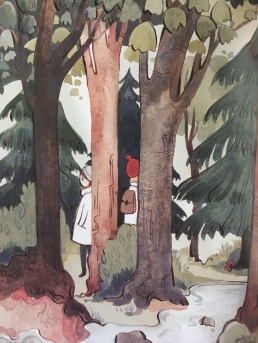 Rađljóst – an Icelandic noun meaning “enough light to find your way by” (25). I’m willing to bet that after simply reading the word, each of our imaginations conjures woods where we’d like to be at twilight, watching the shadows take on strange hues of violet and blue as night rises, and as the light dwindles to a mere ghost leading us through the trees.

Tsundoku – a Japanese noun for “buying books and not reading them; letting books pile up unread on shelves or floors or nightstands” (13).  Eh hemm. Guilty as charged.

Uitwaaien – a Dutch verb meaning “to take a break and walk away from the demands of life to clear one’s head” (28). Who doesn’t need to uitwaaien more? No one? That’s what I thought. Go ye and uitwaaien.

Hiræth – a Welsh noun for “a homesickness for a home to which you cannot return, a home which maybe never was; the nostalgia, the yearning, the grief for the lost places of your past” (31). Sorry. Just give me a moment. I just need to get myself a tissue… The doggone Welsh.

The only problem with such delightful books is that one wants to use the words, introduce or reintroduce them into common parlance, and I already have enough trouble with people looking at me askance as if I had a second head à la manière de Zaphod Beebelbrox.

So, I’m going to start humbly (in a manner distinctly not Zaphod Beebelbrox.) Here’s my reintroduction for the day complete with suggestions for usage.

Greenboarded – collected by Jeffrey Kacirk in The Word Museum, from C. Cough Robinson’s A Dialect of Leeds, London, 1862. “To be greenboarded is when a servant is [brought ] into the drawing-room, or elsewhere, before the master or mistress, to account for any misdoings.”

“Right then! Any and all of you with ‘ATTRIBUTION??‘ written atop your papers, you will come see me during my office hours this week. Prepare to be greenboarded for plagiarism.”

“Uh oh. Anybody know why I’ve been summoned to the Provost’s Office for a greenboarding?”

We all have words we know and love, whether they tickle our fancy or capture something no other word does. Just because other people don’t use them, doesn’t mean that we shouldn’t. Those of you with suggestions for words to be brought back, words in need of love and affection, or just plain old favorites, share!

Mak, Yee-Lum. Other Wordly: Words Both Strange and Lovely From Around The World, illustrated by Kelsey Garrity-Riley. Chronicle Books, San Francisco, 2016.